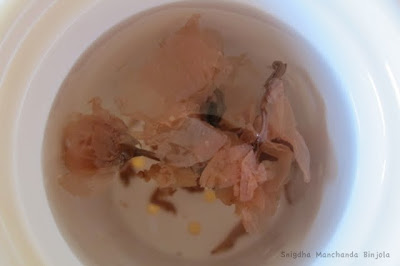 Sakura is Japanese for Cherry Blossom. This is one tea which is well-traveled, literally, as Sakura is the only tea that been to space (in 2005 with astronaut Mamoru Mouri.)
It's around this time of the year, Japan celebrates Cherry Blossom Flower Viewing. Japanese turn out in large numbers at parks, shrines, and temples with family and friends to hold flower-viewing parties. However, given the recent catastrophic events in Japan, I am told this year, the mood is subdued and there are official requests to refrain from hosting Flower Viewing parties in Tokyo.
It was not long ago a colleague from Japan brought me this tea. With my cup of Sakura, I grabbed a cushion, settled down with a book and a few French Palmiers; but it's so difficult to concentrate on the reading. With every sip I'm transported to the thoughts of my friends in Japan and the wonderful memories we've shared together.
As I blankly stare in to my tea cup in daydreaming, I acknowledge that a lot of who I am today in my professional work comes from values I imbibed from my Japanese colleagues. Come to think of it, my love for tea also stems from learning how tea is practiced in Japan and their high regard for it in Japanese culture and traditions. I think it's always nice to be grateful for your learnings and it's only apt that I dedicate this post to all my Japanese friends from past, present and future. 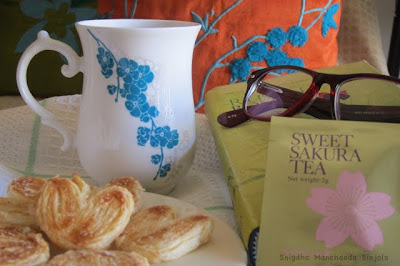 On this summer afternoon in Mumbai, Sakura tea has got me in a reflective mood with its mild flavour. Just like all floral teas, it has health benefits related to skin. It is also a ritual to eat the cherry blossoms just before you finish the last few sips. Here's a step-by-step guide on how it's brewed traditionally in Japan. Sakura Tea spells celebration! Salt-pickled cherry blossoms in hot water is called Sakurayu, and drunk at festive events like weddings in place of Green Tea.
Sakura tea is reserved for special occasion but I believe any day with a new tea and old memories is special enough. Itadakimasu!

Posted by Snigdha Manchanda at 17:55 2 comments: Links to this post

When Maa came over with 5kgs of seasonal red carrots urging me to make Gajjar ka Halwa, I knew I had to come up with an innovative escape route. I am not too fond of sweets and thoughts of carrot pickle and carrot chutneys filled my head when I saw big piles of carrots come out of her bag.
I remember eating carrot chutney with moong dosas long ago and so I immediately started looking up for a recipe on that (which was fairly easy to find). No matter how flavorful this South Indian chutney turned out, I was still looking at a pile of remaining carrots on the counter. So I went back looking for something with a tangy twist on the carrots when I found my second recipe. Reminiscent of the ever-awesome “aam ka murraba”, this chutney had wonderful aromas going in my kitchen. 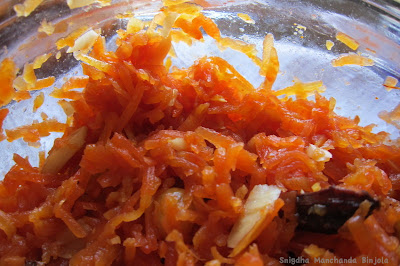 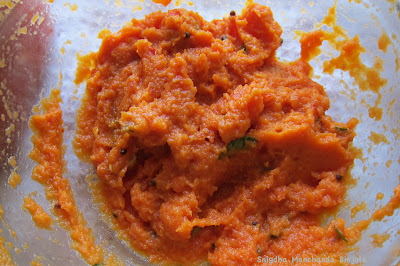 Very happy with my two creations, I started clearing up, but on one end were two big beautiful red/orange bowls of chutney and on the other end was yet another, smaller pile of carrots. Typically when I run out of ideas, I always try bringing in some capsicums. And yet again, it worked as I whirred up the remaining carrots in an impromptu recipe. Here’s what I used:
1 large capsicum
6 medium sized carrots
1 onion
4 cloves of garlic
1/2 inch of ginger
1 tablespoon Habanero Chilli Sauce
Saute all ingredients except the chilli sauce on a high flame. Remove from flame just when the onions start turning transparent. Give a good run in the mixer to make a thick paste. Remove in a bowl and add the Habanero Chilli Sauce. There, it’s done!
I relished it with steamed rice and it also went well with the vegetable burgers I made. Next day Mr. B came home to tell me we’re leaving for Goa that same evening. In all the rush to pack up I completely missed to take pictures of this last container I stuck in the freezer. For now, sitting by the poolside, next to a bright red hibiscus plant, I can only relive those flavors in my memory until it’s time to raid the freezers again.
Posted by Snigdha Manchanda at 17:14 2 comments: Links to this post

Blushing in My Tea Cup is Some Rose Bud Tea

Now I know why they say the best camera is the one in your hand at the right place and right time. A careless tripping of some rose bud tea over a book I was reading resulted in this visual poetry... 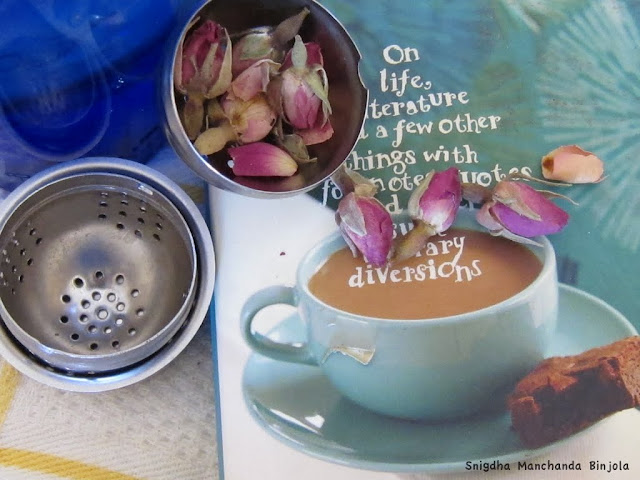 I must confess I've been biased to this beautiful blush, so much so that I've reserved it for special occasions only. What I've captured here is the last batch of my rose bud tea. It saw me through many a tough days and kept me company through days when I wasn't in the pink of health. Rose Bud Tea is said to add sparkle to your skin and ease complaints of bloatedness.

Flower teas are some of the most popular Chinese herbal tea (Tisane), especially Chrysanthemum and Rose Bud Tea which are noted as Woman's herbs. Tisane is not tea at all, it is a caffeine-free herbal infusion which you can savor any time of the day, any number of times a day. Do give it a try. If you're in Mumbai, it's available at Chado, Phoenix Mills.

P.S: Book Cover is Good Night God Bless by Anita Nair and the Rose Bud Tea was bought from a 50-year old Tea House called Tea Chapter in Singapore.
Posted by Snigdha Manchanda at 20:11 No comments: Links to this post 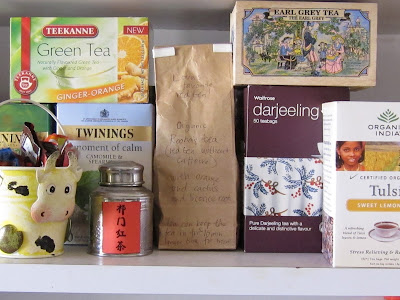 Imagine the storm in my tea cupboard when the new Roobois tea arrived from Sweden. If my teas could come alive at midnight, they would have surely given Mr. Roobios a tough time for grabbing all my attention.

Thank you Lova for sending me tea love. Native to South Africa, roobois is used as traditional medicine to cure digestive and dermatological ailments. I learn it's popular among the health-conscious tea lovers for its rich in antioxidants and flavanols. This particular roobois that I received was infused with orange, cactus and liquorice making it a truly unique brew. Yes, cactus. It was a refreshing change for my tea palette. While I love my classic teas, it's these exotic twists that add spice to my everyday tea time experience.

If we look closer, each life event has a story to tell, a lesson to learn. On my way back home from the "Storytelling in Social Media" workshop I conducted at Kalaghoda this year, I couldn’t help thinking about the wonderful stories each participant carried within themselves, oblivious to the potential of these living stories.

Through my series of workshop on Storytelling I aspire not only to teach businesses about power of narratives; but also train the common eye to catch a shooting story. 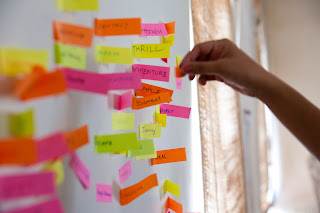 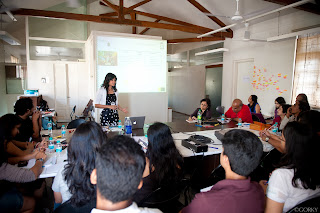 Read my notes from the Kalaghoda workshop

In case you missed the workshop, but are keen on learning more about “Storytelling in Social Media”, I’d be happy to share some of my notes from the session. Please connect with me via www.about.me/snigdha It is very strange, this domination of our intellect by our digestive organs.  We cannot work, we cannot think, unless our stomach wills so.  It dictates to us our emotions, our passions.

After eggs and bacon it says, "Work!"  After beefsteak and porter, it says, "Sleep!"  After a cup of tea (two spoonfuls for each cup, and don't let it stand for more than three minutes), it says to the brain, "Now rise, and show your strength. Be eloquent, and deep, and tender; see, with a clear eye, into Nature, and into life:  spread your white wings of quivering thought, and soar, a god-like spirit, over the whirling world beneath you, up through long lanes of flaming stars to the gates of eternity!"


Image: The Joy of Color
Posted by Snigdha Manchanda at 22:31 No comments: Links to this post Much as I love Folk Tales I love Garlic. The sound and smell of frying garlic is my favorite memory from my mother's kitchen. Every region has it own version of how the Garlic came into being and how it was used throughout history.
During the reign of King Tut, fifteen pounds of garlic could buy you a healthy slave. Even when King Tut's tomb was excavated, there were bulbs of garlic found scattered throughout the rooms.
The Koreans, ate pickled garlic before passing through a mountain path, believing that tigers disliked it.
Roman soldiers ate garlic to inspire them and give them courage. They planted fields of garlic in the countries they conquered, believing that courage was transferred to the battlefield.
The following Philippine Folk Tale narrates how garlic came into being.

There once lived a beautiful maiden whose mother arranged to be married to the son of one of the richest datus in the land. She was so lovely that a rival suitor murdered her fiance. That rival was, in turn, killed by the dead fiance's loyal slave.


As news of the double-deaths spread, the young maiden runs up a sacred mountain and implores Bathala (their God) to take her away so that her beautiful face will no longer cause any future killings.
She gets zapped by lightning.
Her mother buries her and grieves, watering her grave with tears.
One day, the mother sees some grass-like plants sprouting on top of her dead daughter's graves. Thinking it was some useless weed, she pulls it out and sees seeds that look like her dead daughter's teeth.
She hears a supernatural voice boom: "Those are your daughter's teeth."
She gives thanks, knowing this is Bathala's way of giving her something that will remind her of her daughter. She plants the seeds all over her land to spread the memory of her daughter, and that's how the garlic plant began.
References:
http://folktales.webmanila.com/folktales/plants/?garlic
http://americanfolklore.net/folklore/2010/10/garlic_superstitions_folklore.html
Image Courtesy: http://www.designmom.com/
Posted by Snigdha Manchanda at 23:43 No comments: Links to this post

Via my about.me profile!